Update: The U.S. Food and Drug Administration (FDA) has approved the Ebola vaccine rVSV-ZEBOV (tradename “Ervebo”) for the prevention of EVD. The rVSV-ZEBOV vaccine has been found to be safe and protective against only the Zaire ebolavirus species of ebolavirus.

Ebola Virus Disease (EVD) a deadly disease with occasional outbreaks in people and nonhuman primates (such as monkeys, gorillas, and chimpanzees).

Ebola virus was first described in 1976 near the Ebola River in what is now the Democratic Republic of Congo. Since then, the virus has emerged periodically and infected people in several African countries. Click for the CDC’s Cases and Outbreaks of EVD by Year, which shows each of the known cases and outbreaks of EVD and are described by year or country where the case was discovered or imported.

Where does Ebola virus come from?

Scientists do not know where Ebola virus comes from, however there are six viruses within the genus Ebolavirus. Of these, only four (Ebola, Sudan, Taï Forest, and Bundibugyo viruses) are known to cause disease in people.

The viruses that cause EVD are located mainly in sub-Saharan Africa. People can get EVD through direct contact with an infected animal (bat or nonhuman primate) or a sick or dead person infected with Ebola virus.

Many common illnesses can have the same symptoms as EVD, including influenza (flu), malaria, or typhoid fever.

Symptoms may appear anywhere from 2 to 21 days after contact with the virus, with an average of 8 to 10 days. The course of the illness typically progresses from “dry” symptoms initially (such as fever, aches and pains, and fatigue), and then progresses to “wet” symptoms (such as diarrhea and vomiting) as the person becomes sicker.

Primary signs and symptoms of Ebola often include some or several of the following:

Other symptoms may include red eyes, skin rash, and hiccups (late stage).

From the CDC: Scientists think people are initially infected with Ebola virus through contact with an infected animal, such as a fruit bat or nonhuman primate. This is called a spillover event. 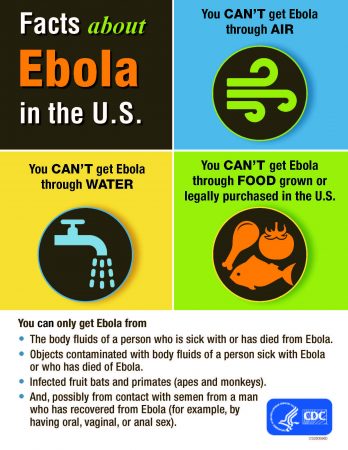 After that, the virus spreads from person to person, potentially affecting a large number of people.

The virus spreads through direct contact (such as through broken skin or mucous membranes in the eyes, nose, or mouth) with:

When people become infected with Ebola, they do not start developing signs or symptoms right away. This period between exposure to an illness and having symptoms is known as the incubation period. A person can only spread Ebola to other people after they develop signs and symptoms of Ebola.

Additionally, Ebola virus is not known to be transmitted through food. However, in certain parts of the world, Ebola virus may spread through the handling and consumption of wild animal meat or hunted wild animals infected with Ebola. There is no evidence that mosquitoes or other insects can transmit Ebola virus.

CDC Factsheet: Why Ebola is Not Likely to Become Airborne

This epidemic was the largest Ebola epidemic in history and lasted about two years.

The initial case, or index patient, was reported in December 2013 and was an 18-month-old boy from a small village in Guinea that was believed to have been infected by bats. A few months later, on March 23, 2014, with 49 confirmed cases and 29 deaths, the WHO officially declared an outbreak of EVD.

By August 2014, WHO declared the situation a Public Health Emergency of International Concern (PHEIC). A PHEIC is designated only for events with a risk of potential international spread or that require a coordinated international response, both of which were true for this particular epidemic. Over the duration of the epidemic, EVD spread to seven more countries: Italy, Mali, Nigeria, Senegal, Spain, the United Kingdom, and the United States.

During the West African Ebola outbreak, 11 people were treated for EVD in the U.S., two of whom died. The majority were infected with the Ebola virus outside of the U.S. and either medically evacuated into the U.S. for treatment or entered the country as a regular airline passenger. Two nurses who cared for a sick Ebola patient contracted EVD, marking the first known transmission of EVD in the United States. Both recovered.

The outbreak was declared over in June 2016.