Information on Mosquitoes and EEE Virus 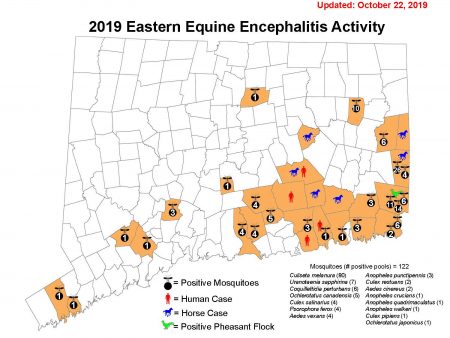 NVHD will update this page as information becomes available or updated regarding Eastern Equine Encephalitis in CT and the Valley region.

For residents of towns that make up the Naugatuck Valley Health District — Ansonia, Beacon Falls, Derby, Naugatuck, Seymour and Shelton, the risk of acquiring any mosquito-borne disease, whether it be Eastern Equine Encephalitis (EEE) or West Nile Virus, is close to zero at this time of year.

On August 26, 2019, the Connecticut Agricultural Experiment Station (CAES) found EEE virus in mosquitoes that bite only birds at their trap site in Shelton, which is near a swamp.  Mosquitoes trapped at this CAES site since then have tested negative for EEE virus.

The NVHD Director of Health remains in close contact and consultation with the State of Connecticut Mosquito Management Program, which is a collaborative effort involving the CAES, the Department of Public Health, the Department of Energy & Environmental Protection, the Department of Agriculture, and the UCONN Department of Pathobiology and Veterinary Science.  These are the agencies responsible for monitoring the potential public health threat of mosquito-borne diseases in our state.

From a public health standpoint, NVHD and the Connecticut Mosquito Management Program are recommending that Valley residents take personal protective measures to prevent mosquito bites until the first hard frost of the fall.  It is not necessary for residents in our District to cancel or limit activity around dusk or dawn.  Spraying pesticides to reduce mosquito populations is not likely to be effective at this time of year.

NVHD Director of Health Jessica Stelmaszek said, “Connecticut, particularly the southeastern part of the state, and our neighboring states in New England, are seeing an unusually high presence of EEE detected this year however I want to remind Valley residents that the risk of transmission in the western part of the state remains very low. Even though the risk is low, residents should still practice precautions to avoid being bit.”

NVHD is asking Valley residents not to take unnecessary trips into marshes and freshwater swamps as these are typically breeding grounds for mosquitoes that transmit the EEE virus, with such mosquitoes being most active at dusk and dawn.  Overnight camping or other substantial outdoor exposure in freshwater swamps should be avoided.  Even though the temperatures are getting cooler, mosquitoes continue to be active until the first heavy frost and residents should continue to take measures to prevent mosquito bites.

NVHD is recommending that residents continue to take general precautions that include the following: 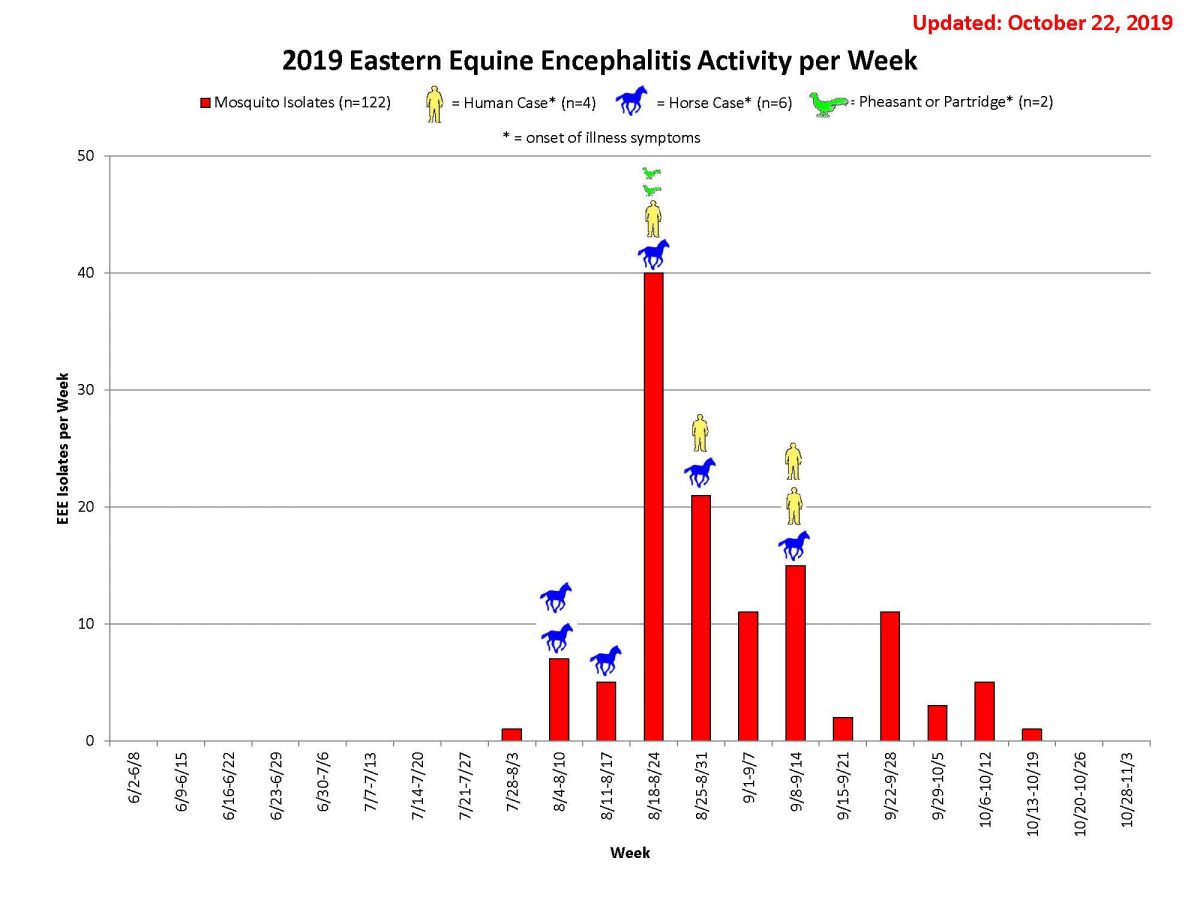 The Connecticut Agricultural Experiment Station is a separate state agency responsible for trapping, identifying, and testing mosquitoes for encephalitis viruses. 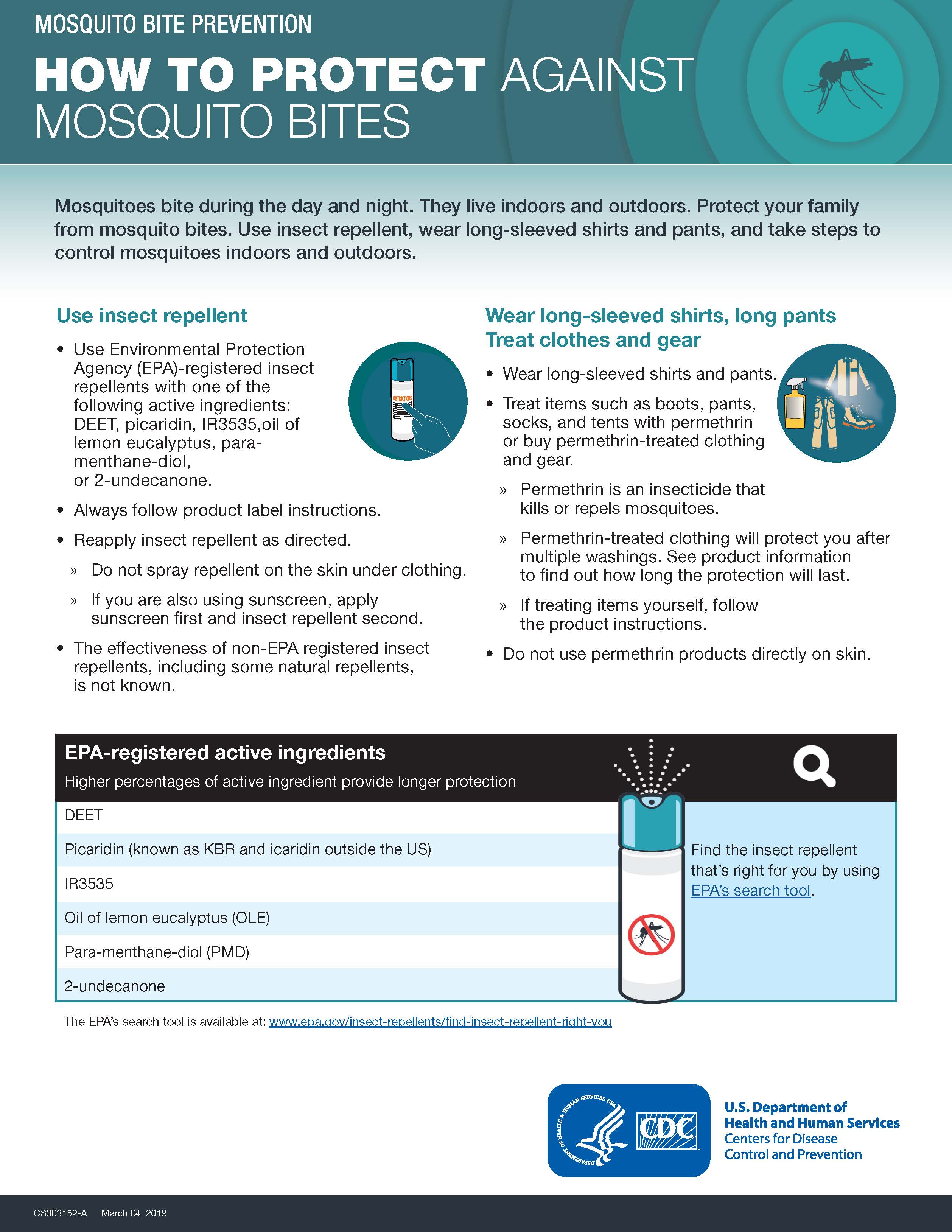 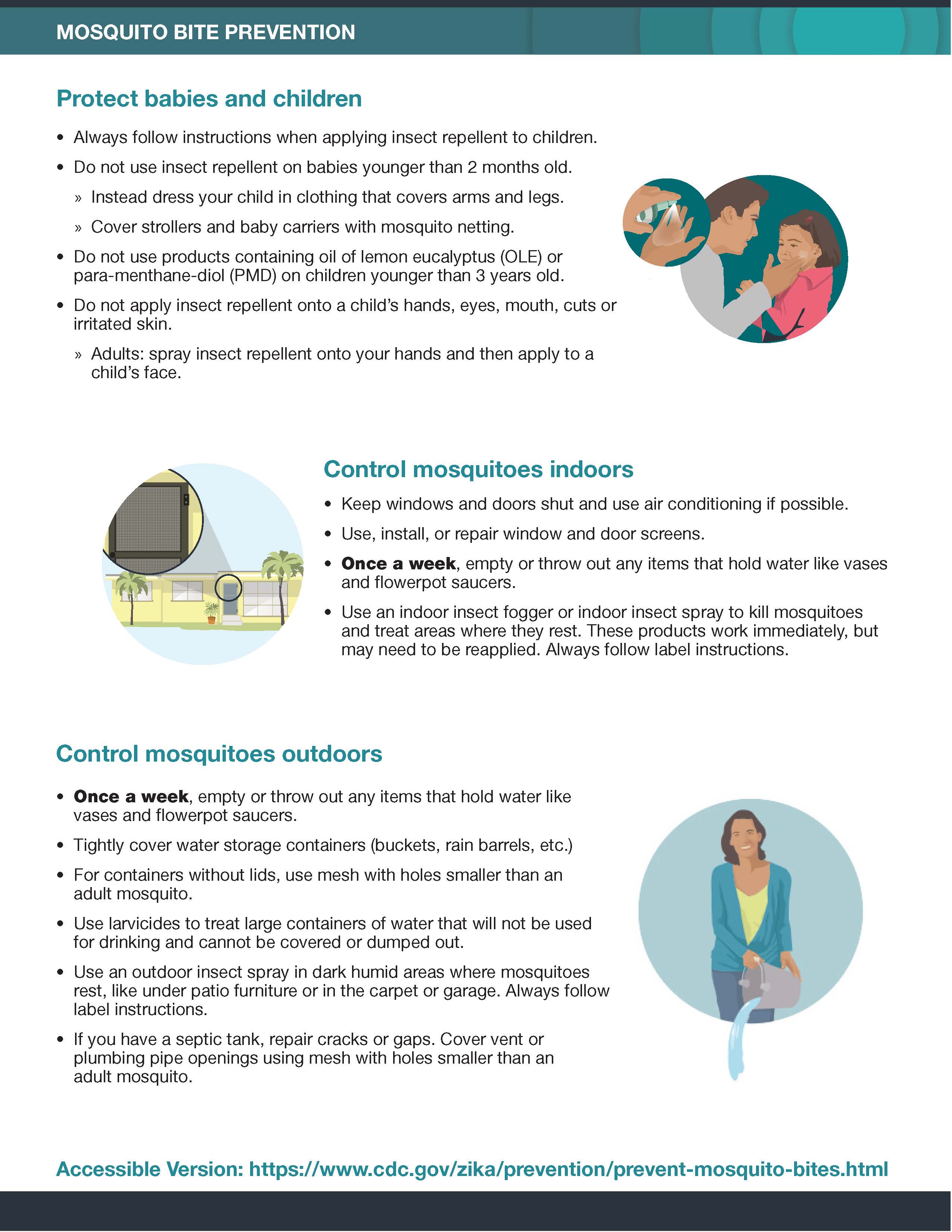 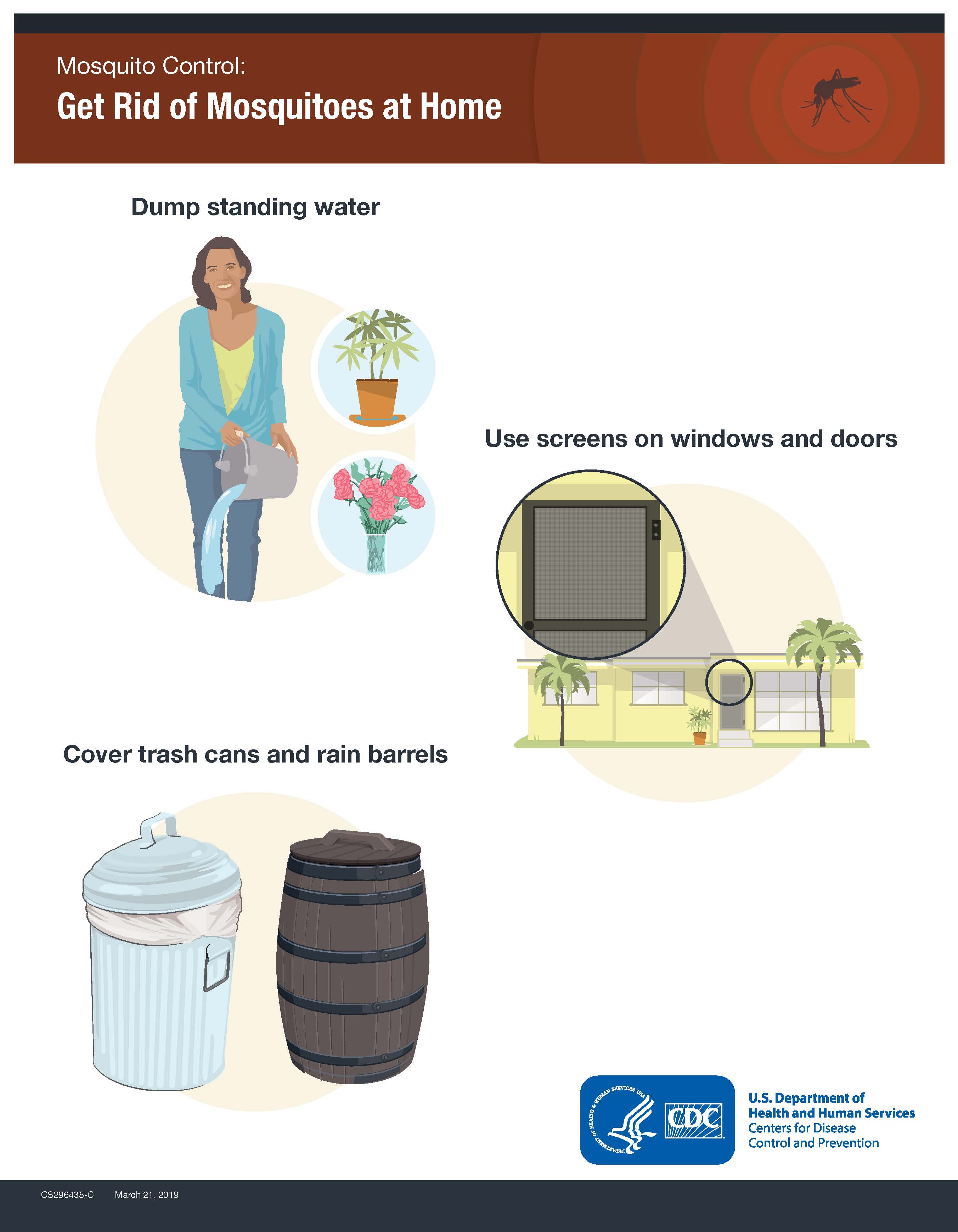 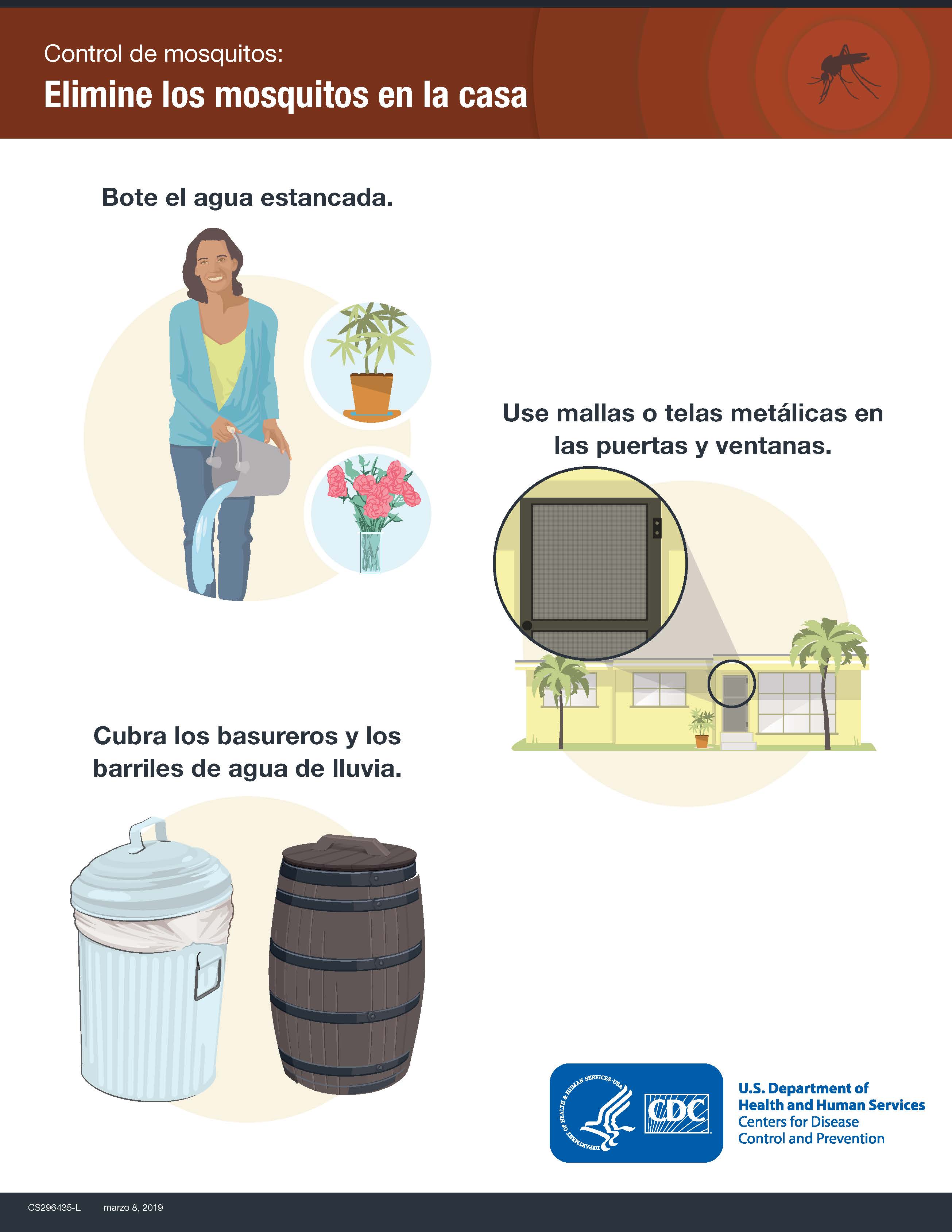 What is Eastern Equine Encephalitis?

Eastern equine encephalitis (EEV) is a rare but serious disease caused by a virus.

How is the EEE virus spread?

The EEE virus is spread through the bite of an infected mosquito.  Transmission to humans requires mosquito species capable of creating a “bridge” between infected birds and uninfected mammals such as some Aedes, Coquillettidia, and Culex species. **The mosquito that tested positive in Shelton was a Cs. melanura mosquito which feeds almost exclusively on birds so it is not considered an important vector for human transmission.  The mosquitoes are found in freshwater swamps and hardwood swamps.

The virus is not spread directly from person-to-person.

Who is at risk for EEE?

In CT, the greatest risk for being bitten by an infected mosquito is from late July to mid October during activities near fresh water swamps although most mosquitoes in CT do not carry EEE. Anyone can get EEE if bitten by an infected mosquito however persons over age 50 and younger than age 15 are at greatest risk of severe disease (encephalitis) following infection. According to the CDC, EEEV infection is thought to confer life-long immunity against re-infection.

What are the symptoms of EEE?

EEEV infection can result in one of two types of illness, systemic or encephalitic (EEE).

How soon do symptoms appear?

Symptoms can appear anywhere from 3 to 10 days after being bitten by an infected mosquito.

What is the treatment for EEE?

No specific antiviral treatment for EEEV infections is available. Patients with suspected EEE should be hospitalized, appropriate serologic and other diagnostic tests ordered, and supportive treatment provided.

Three of every ten (30%) people who get the disease will die from it.

How can EEE be prevented?

Prevent mosquito bites. There is no vaccine or preventive drug.

These facts are for informational purposes only. It should not be used for self-diagnosis or as a substitute for consultation with a health care provider. If you think that you may have this infection, or have questions about the disease described above, you should consult your health care provider.

The Centers for Disease Control and Prevention – EEV Webpage

9/13/19: NVHD’s Director of Health sat down with News12 Reporter Caren Pinto on Friday, September 13, 2019 to provide an update on the Shelton mosquito trapping station. No mosquitoes have tested positive for EEE or other disease since the mosquito trapped on August 26, 2019 tested positive for EEE.  Residents should still practice general mosquito prevention precautions (see above).

10/1/19: CT DPH Press Release: DPH Announces Death of the Third Person Diagnosed with EEE This Year (East Haddam) and the Diagnosis of EEE in a Fourth Person (Colchester) Who Remains Hospitalized After Five Weeks